I don’t make it a habit of talking about trades that I still have active positions in, so I’m writing the first half of this post ahead of time.

I don’t currently have the ability to short a stock. While I have the funds necessary to open a margin account, they are currently spread across three brokers. First there was the “I need an IRA” broker, followed by the “Hey everyone else uses them!” broker, and most recently the “Can you believe we pay $10 per trade for that other broker?!” broker. Yes it’s a mess, I agree. But the end result is no shorting. The best I can do is inverse ETFs, which is hardly a precision instrument.

But of course there’s an alternative to shorting stock: buying put options.

As of this writing I have read six – yes, six! – books on options and futures. And the weirder trade combinations (“Iron Condor” anyone?) still bend my brain into n-dimensional shapes. But I get the basics. Unfortunately, these books are good at telling you the “what” but not the “why” or “how”.

I don’t give a put what a Long Put Butterfly is. Just tell me where to put my put and how to make money at it!

But slowly it’s coming together. Here’s what I’ve learned (and tell me if I’m wrong!):

– Buying simple puts and calls limit your risk. All you can lose is what you paid for them.

– The numbers move faster. A couple of dollars on the underlying stock movement can double your investment. Or render it worthless.

– In-the-money strike prices are more expensive (because they have intrinsic value already). But they more closely track the underlying stock price than an out-of-the-money strike. There’s no waiting around for your price to get hit before seeing any action.

– Options enter a time warp when they’ve got less than 30 days to expiration. You experience time decay, which is like tooth decay except your teeth don’t expire worthless. And no amount of brushing will make your OTM put profitable. So when buying a simple call or put option, pick longer expiration dates (which are also more expensive than shorter expirations).

So with much hand-wringing and double-checking and chart-gazing, I purchased a put option this morning. Yes, I risked a whopping $160, fully prepared to lose it all for the experience. A day at Six Flags Magic Mountain would have been cheaper and possibly more thrilling, but I can’t do that sitting in front of my computer screen.

I bought a single put contract (“aw isn’t that cute! One contract!” you’re thinking) on Questar Corporation (STR). Here’s my shorting logic: the utilities sector is currently the worst-performing sector. Questar has had a string of down days. And – bonus! – they’ll be reporting earnings tomorrow after the closing bell. So this is a fundamentals/technicals/earnings-surprise play.

Total crap-shoot in other words, but with a certain logic to it.

My trade has an in-the-money strike price of $25, and the previous day’s close was $24.09. It opened down at $23.98. My breakeven point on the underlying stock price is roughly $23.77 (I had to fudge the charts a little to figure it out), and my investment doubles (again, roughly) if the stock falls to $21.70. I have a trailing stop of roughly 2 x ATR above the low, but this really only comes into play if I’m profitable and the stock starts heading back upward (remember I’m shorting with a put). If STR doesn’t have a sucky earnings report, then the trailing stop won’t matter. Also, I have calendared a date just before the 30-day expiration date to sell the puppy if it’s in-the-money.

Yesterday Questar announced their earnings: they missed their EPS estimates by $0.03, and also missed revenue estimates. Yet the stock is actually UP from where I bought the put option. WTF? Probably because the day before their earnings announcement, they also announced an increase in their dividend by $0.02. Yesterday was a sizable up day and today is a down day. So there’s hope that the stock is heading in the right direction (downward). But it certainly wasn’t the dramatic movement I’d hoped for. Perhaps the takeaway from this is don’t buy put options on stocks that pay dividends.

P.S. Amazing what a little research can show you, once you’ve figured out the right question to ask. This article points out that stocks that pay dividends usually see their price fall as they get closer to the payout date, and so the premiums on put options get more expensive. But that’s good for me! I’ll report back later. 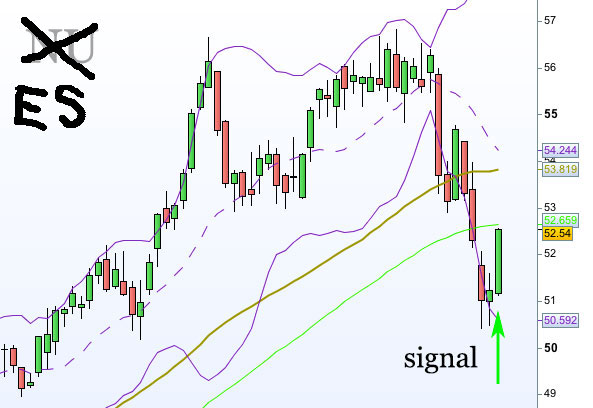 Update 02/20/15: Northeast Utilities changed its name to Eversource Energy (ticker ES) on 02/19/15. I couldn’t figure out why the charts were suddenly devoid of movement!

A new signal using my Bollinger Band swing-trade system was generated today. Northeast Utilities (NU) has the required four bars piercing the lower band, followed by the most recent ‘green day’ not piercing the lower band. You can read the full set of rules in this earlier post here. If you were trading this, you’d buy at tomorrow’s open. As always, trade at your own risk! And don’t be a dummy.

My prediction: oil prices are at or near their bottom and will start to rise slowly over the next few months.

And if you’ve been following along on my blog, you know until recently I was shorting oil via an ETF with much gusto and vigor. When it finally stopped out, it was both a relief because the market stopped wobbling, and a delight because of the returns I got on my investment.

One thing that kept me confident that oil prices would keep falling was that just about every day some analyst on Seeking Alpha would post a very reasoned and detailed treatise on why oil couldn’t possibly fall any further. “It can’t go below $50!” cried the analysts. “So it’s going to $40” I thought. The universe loves nothing better than to prove predictions wrong.

It got quiet. Too quiet. The prognosticators stopped saying oil couldn’t fall any further. After many months of being proved wrong, they finally threw in the towel.

And now, tentatively, a few analysts dip their toes in the bearish water and say – so quietly you can barely hear them – that oil could in fact fall further.

And so bull markets are born.

Disclosure: I’m long XLE, which is an energy ETF. Not oil per se, but oil-ish. The energy sector (according to Jay Kaeppel) tends to be bullish between February and May. That, coupled with my tongue-in-cheek method of predicting the oil bottom (not an oily bottom, mind you), is good enough for me.

After reading Jay Kaeppel’s book Seasonal Stock Market Trends, I took a look at some of my swing systems to see if they could be improved by only trading during certain times of the year. Sure enough, my Bollinger-band swing trading system improves if you do NOT trade during the month of May. And it improves even more if you exit any trade that happens to overlap into the month of May. I don’t know why this is the case, but removing May from trading made a big difference. 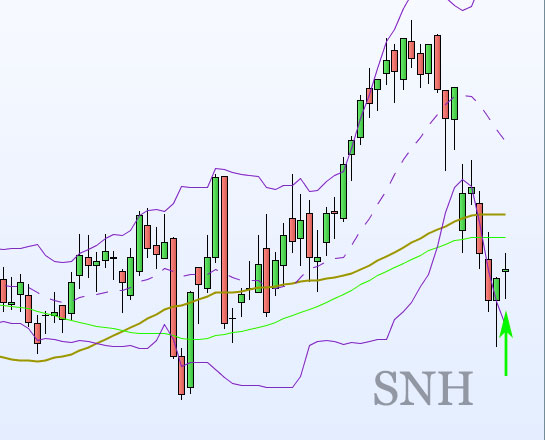 As per my post from earlier today on swing-trade systems using Bollinger bands, here’s a stock that has generated a signal for tomorrow (February 12, 2015). Senior Housing Properties Trust (SNH), which is a REIT.

If I were going to trade this, I would enter at open tomorrow. I would use a soft stop loss of 14% and would follow the rules here. That’s if *I* were going to trade it. You on the other hand should do nothing of the sort, without thoroughly researching yo shizzle and making up your own mind about stuff. If you lose money, it’s your own damn fault. If you make money, I get all the credit.