I’ve been teaching myself Python, and I’ve had a couple of successes recently where I took a concept or “need” and coded it to completion. Yay, me!

One thing I find myself doing a lot is sorting a batch of data by one column in Excel/Google Sheets, then dividing up another column into quantiles and averaging each quantile for later graphing. This a research technique I use a lot with financial data.

END_OF_DOCUMENT_TOKEN_TO_BE_REPLACED

In hindsight, it’s fun to look at stocks that have had a huge surge, only to collapse violently after they peak. And by “fun” I mean sitting on the sidelines watching, as opposed to pulling one’s hair out when you’re long that particular trade.

Above you can see Apple (AAPL) in 2008, where it hit its 52-week high, only to collapse a few days later, for a very significant loss.

Are these moments a shorting opportunity? I aim to find out.

So first, I’ll pick some somewhat arbitrary definitions of a ‘peak crash’ event.

• stock universe is the historical constituents of the Russell 3000 index.

• The trigger is a drop of 8% or more from one close to the next, within that 10-day period of the highest close being reached.

Let’s take a look at the average gain or loss (expressed as a percentage) for each forward-looking period:

A slight mean-reversion tendency for the short term, and a slight downward continuation for the longer terms. The longer the holding period, the deeper the average loss, but I don’t know if these values are statistically significant.

Perhaps these peak-crashes are highly dependent on the overall market health to be a successful short? Let’s take a look at the yearly gain/loss averages for each forward looking period.

Clearly there are some variations over the years!

No, I’m kidding. That’s stupid. But what’s NOT stupid is taking a look at how the peak crashes behave under varying market conditions.

This is a simple way to show if the market is doing well or not. There are of course other ways, such as my breadth diffusion indicator discussed a while back. But I wanted to keep this simple.

Here is a chart of all the peak-crash events, sorted by the S&P-percent-under-250-day-highest-close value. Then divided up into vigintiles. I’ve put the the ranges of some select vigintiles so you can get a sense of the values they encompass.

You’ll note that there are many more instances where these peak-crash events happen and the market is very close to its 250-day closing high. In fact, about half of nearly 10,000 events occur when the market is 0-3.5% below the 250-day highest close.

From a shorting standpoint, the action doesn’t really start happening until the market is about 5.9% below its yearly closing high. And while the shorter periods show a pesky tendency to bounce back after such a drop over most market conditions, the 40-day forward period looks promising. Let’s look at that more closely.

There might be a shorting system here. When the market is 6% down or more, these peak-crashes on average end up in a further two-month (40 day) loss. I’ll leave that to the reader to actually refine into a workable system.

And when markets are booming—remember those days?—perhaps a good shorting system might be found in the 10-day forward period (see below). The average loss when the market is less than 2.9% below the 250-day highest close is much smaller, but it’s pretty consistent. This might be worth checking out for when times are good again.

And because charts can be a little boring, here’s a mountain sunset photo, taken on my phone. 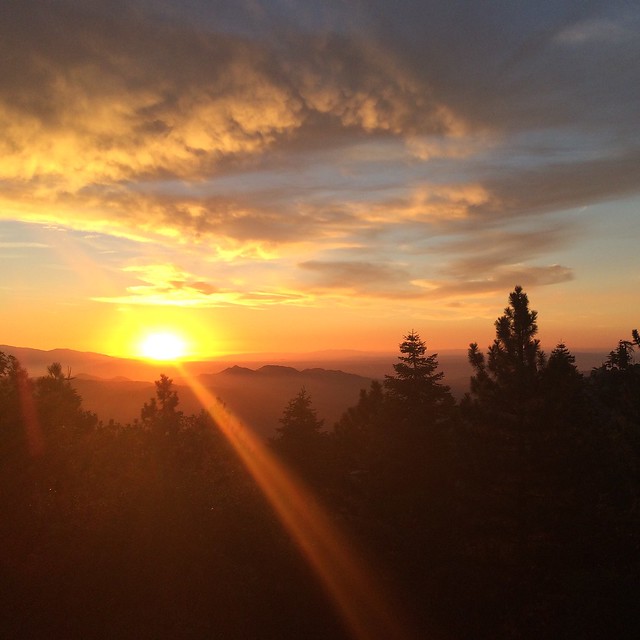 Recently I posted a number of articles on various breadth diffusion indicators and their relative effectiveness in predicting the health of the S&P 500. The big winner was the system that compared the number of stocks in the historical constituents of the Russell 3000 that were up 30% or more over the last quarter (60 trading days) vs those were 30% or down over the same period. You can read the whole series here.

The breadth diffusion value is computed as (up30 / (up30 + down30))*100. Suffice it to say, we have been seeing very low numbers recently. The current value is 8.2. So I thought I’d go back and see what those low numbers have foretold in the past.

All that to say a bounce seems likely.

A reader on my blog (Thanks Kris!) suggested that I explore how much noise is needed to send Genotick off the deep end. You’ll recall from my earlier post on the subject that I was looking for hidden biases that Genotick might have, and explored how it responded to pure and noisy sine waves of data.

END_OF_DOCUMENT_TOKEN_TO_BE_REPLACED

Today marks the sixth day in the row that the S&P 500’s RSI(2) value was under 25. Since Jan 1 2000, this has happened only 15 times prior to today. So I thought it would be fun to see what the forward return has been after these events. Here’s a handy spreadsheet. I calculated the forward return from the following day’s open to the close of either the 5th or 20th day. I.e. if you were trading based on today’s performance, you’d buy next Monday at open, and exit on Friday’s close (for the 5 day version). I haven’t included those pesky commissions in these numbers.

Note that only five of the 5-day periods were negative, and all but one turned positive over the 20-day period.

Should you buy on Monday? Is 15 data points enough? Is there an Easter Bunny? I can only answer two of those questions.